Despite the cold weather, a loud and theatrical protest was again held outside the AGM of British mining company Global Coal Resources Management (GCM) at the Aeronautical Society in 4 Hamilton Place in London at 10am today. In solidarity with the communities in Phulbari, where three people were shot dead as paramilitary officers opened fire on a demonstration of 80,000 people in 2006, protesters reaffirmed that they will not sleep until GCM is ousted from Bangladesh.

A parallel protest followed by a press conference was held in Phulbari against the plans by GCM, an AIM-listed company who want to build a massive open cast coal mine by forcibly displacing 130,000 people in Phulbari, northwest Bangladesh. Inside the AGM in London, dissident shareholders asked questions on behalf of the communities in Phulbari and Dinajpur by accusing the company of human rights abuses as the CEO of the company has filed multiple arbitrary charges against 22 frontline defenders, indigenous farmers, small entrepreneurs and local leaders who opposed the mine.

Here is a link to a short video of today’s protest in London!

Climate activists and community defenders under the banner of Phulbari Solidarity Group and Committee to Protect Resources of Bangladesh calling for three-point demands, blocked  the pavement at the main entrance of the Aeronautical Society for two hours. They demanded that GCM’s Chief Operating Officer, Gary N Lye, must withdraw all cases against activists in Bangladesh with immediate effect, that GCM must stop selling shares in the name of Phulbari project in London’s Alternative Investors Market, and that GCM must Leave Bangladesh immediately.

The demo ended with a comedy coal show where activists wearing masks of coal thieves, Gary N Lye (CEO of the company) and Michael Tang (the Executive Chairman of the company), attacked a Bangladeshi woman holding coal from Phulbari. Protesters forced the maskmen to leave the premises and sang Phulbari jingles against coal mine: “your home and my home, Phulbari Phulbari”.

Dissident shareholders inside the AGM poured scorn on GCM’s 2017 Annual Report which claims that the company “Continued to make progress with principle partner China Gezhouba Group International Engineering Co Limited [CGGC, ultimately owned by China Gen Engineering Ltd.]”and that they are “Working on proposal for mine mouth power plant to provide integrated power solution for government of Bangladesh.”

The company claims, overlooking the declining of share price over the last month from £43.00 on 14 November to £26.38 today, that “Last month [it] raised 2m pounds before costs enabling all shareholders to participate and to enable GCM to continue pursuing strategy of joint mine and power plant proposal.” The report concludes by acknowledging “There are significant challenges ahead”, not least achieving approval to go ahead. They still believe that they are “in the right direction and hopes to continue momentum into New Year.” Shareholders condemning the report say that it represents a poor attempt to cover up the fact that they lost credibility and market confidence. 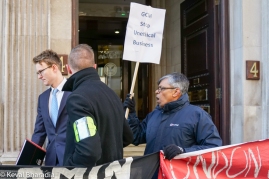 Shareholders also note the Bangladesh government has not given the company the go-ahead because of a lack of a “social licence to operate” in Phulbari and anywhere else in Bangladesh. There was also an OECD complaint about GCM failing to keep obligations. An internal review of the UK governments investigation affirmed that the OECD 2011 guidelines do apply to human rights abuses that would occur if the project went ahead. GCM’s Board of Directors failed to respond to shareholders scrutiny.

Today’s meeting ended in a rush, lasting less than an hour, as the Board was exhausted by questions. 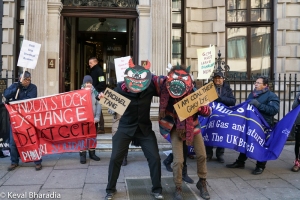 Rumana Hashem, the PSG spokesperson and an eye witness to the Phulbari outburst in 2006, said:

“the company is abusing our people and criminalising society in Bangladesh. We will hold them to account here. We will not give up until London Stock Exchange de-list GCM. We will ensure that this company could never go back to Bangladesh.’”

Akhter Sobhan Khan of Committee to Protect Resources of Bangladesh said that:

“The company does not have a valid contract with Bangladesh; nevertheless they are selling shares in the name of Phulbari project. London Stock Exchange must de-list GCM as they are doing deceitful marketing of the project”.

Global Coal Management, formerly known as Asia Energy, has been allegedly involved in abuse and harassment of opponents of the proposed Phulbari mine. Media reports on the brutal death of Nasrin Huq, the former executive director of Action Aid, revealed that Huq was killed brutally in her car park because of her strong opposition to the project.[i] Later in August 26 in 2006, three people were shot dead and two hundred injured in a demonstration of 80,000 people who marched against plans by the company. It has been 11 years since the powerful resistance in the aftermath of the shooting against an open-cast mine in Phulbari has put a decade long halt to the project. Government has cancelled the company’s license but the company has been pushing the government to give them a go ahead.

If the mine is built, it would not only displace 130,000 families of farmers in Phulbari but also would destroy 14,600 hectares of highly cultivable land, would pose threats to clean water resources and would leave devastative impact on one of the world’s largest mangrove forests and UNESCO heritage site, the Sunderbans. In February 2012, seven UN rapporteurs expressed grave concerns to the project, and at national and international level. The UK National Contact Point has acknowledged the strong opposition to the project in an assessment in 2015.

For further information on GCM and Phulbari resistance:

Check out the Facebook event page for updates and more photos

Read the memorandum of Tuesday’s demo outside the AGM: GCM Must Leave Bangladesh Now

Watch a Bengali version, featuring statement by the member secretary of Committee to Protect Resources of Bangladesh, UK branch, of the demo 2017: https://youtu.be/v35x0Tr0bC0

Memorandum of the Demonstration against AGM of Global Coal Resources Management Plc. 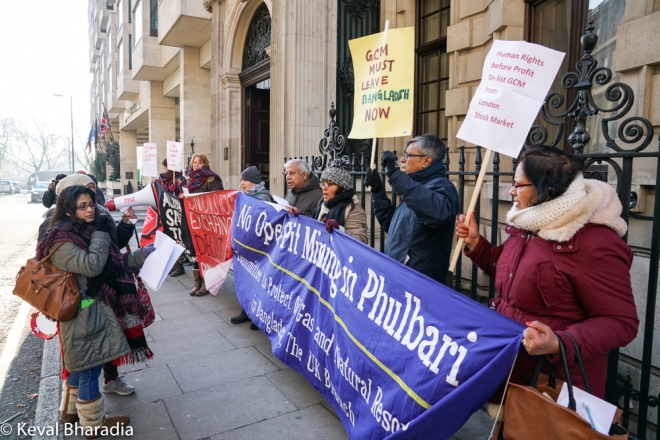 Today we, the activists from Bangladesh, Tower Hamlets, and London’s environmental organisations, have gathered to call upon the AIM-listed London-based extractive company, GCM Resources Plc, to leave Bangladesh. The company, GCM Resources, is desperately moving to implement an immense open pit coal mine in northwest Bangladesh, forcibly displacing an estimated 130, 000 people and destroying the homes, lands, and water sources of as many as 220,000 people. If the project is implemented, it will destroy over 14,660 hecters of fertile agricultural land that produce three food crops annually, threatening to increase hunger in a country in which over a third of all children and nearly 17 percent of the entire population are undernourished.

GCM’s planned Phulbari coal mine has provoked repeated protests by local people. Three people were killed and over 200 injured when paramilitary officers opened fire on a protest against the project in August 2006. Protests in 2013 forced the company’s CEO, Gary Lye, to abandon a visit to the area.

The project has generated grave concern at national and international levels including the United Nations. On 28 February, 2012, seven UN human rights experts have called for an immediate halt to the project, citing threats to fundamental human rights, including the rights to water, food, adequate housing, freedom from extreme poverty and the rights of indigenous peoples. On  20 November, 2014, the UK government has concluded, following an investigation into GCM’s activities in Phulbari, that the company had breached the OECD Guidelines on Multinational Enterprises by failing to “foster confidence and mutual trust” with the people who would be affected by the mine. We welcome the Board’s affirmation that the 2011 Guidelines on human rights do apply to the planned conduct of an enterprise and its prospective impacts on human rights (para 6).  We welcome also the finding that the 2011 Guidelines would apply if GCM “continued to be “actively involved in the project” (para 19).  An internal review of the investigation affirmed that the OECD 2011 guidelines do apply to human rights abuses that would occur if the project went ahead.

But Global Coal Resources Management is aggressively moving ahead to implement Phulbari coal project. They are selling fraudulent shares in London’s Alternative Investors Market (AIM) –although the company does not have any valid contract with Bangladesh Government for business in Bangladesh and they do not have any other project elsewhere. It’s been 11 years since we have put a halt to the Phulbari coal project. The government in Bangladesh has declined to renew the contract for the project. GCM do not have any valid project in anywhere in the world. But they do hold an office in Bangladesh and the company’s corrupt CEO keep going back to Bangladesh to lobby MPs and politicians. We say they should leave Bangladesh now.

In 2011 and 2012, we have served two notices of eviction to GCM. Instead of leaving Bangladesh, GCM has been abusing communities and activists in Dinajpur and Phulbari. They are violating the guidelines of OECD.  The company’s Chief Executive Officer, Gary N Lye has filed multiple arbitrary cases against 26 frontline community defenders in a Bangladeshi court. These community defenders are farmers and small entrepreneurs who do not have as much as money as Lye to fight the cases in a court. Through the harassment and abuse of frontline community activists, the company embarked on a project to silence opponents to the Phulbari coal project.

The UK Committee  (National Committee) to Protect Oil- Gas-Mineral Resources and Port-Power in Bangladesh and Phulbari Solidarity Group, in conjunction with Foil Vedanta, London Mining Network, Reclaim the Power, Socialist Party of England and Wales, and all our co-worker organisations stand with the communities in Phulbari, Dinajpur and Bangladesh.  We will not be silent bywatcher. We demand, as National Committee of Bangladesh, that:

We declare, on behalf of the people in Phulbari, our resistance will not end until the above three-point demands are met. We will not give up until GCM has closed their office in Bangladesh, until they have stopped selling shares in the name of Phulbari coal project in London Stock Exchange.

Bangladeshi activists together with London-based climate defenders will hold a lively and theatrical protest against the London-based AIM-listed mining company, in solidarity with representatives of communities in Phulbari, where three people were shot dead and 200 injured in a demonstration of 80,000 people in 2006 for opposing a massive coal project.

Global Coal Management Resources (GCM), formerly known as Asia Energy, wants to build an immense open cast coal mine in Phulbari, Bangladesh. The project threatens to destroy the homes, lands and water sources of as many as 220,000 people, and forcibly evict an estimated 130,000 people. If the project is implemented, it would destroy 14,600 hectares of highly cultivable land and would leave devastative impact on the world’s largest mangrove forests and UNESCO heritage site, the Sunderbans. 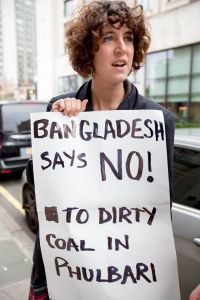 Bangladesh said ‘NO’ to open cast mining. The government has declined to renew GCM’s license after the shooting. The company does not hold a valid contract with Bangladesh. But they are selling shares in the name of Phulbari project in London Stock Exchange. GCM’s CEO has been systematically abusing local opponents of the project. 26 frontline community defenders in Phulbari and Dinajpur have been faced with multiple arbitrary cases as GCM’s CEO filed illogical cases. We are heading to GCM’s annual general meeting to challenge the investors and to ask them to leave Bangladesh. The annual general meeting of the company will be held at 10.00 a.m. on Tuesday 12 December 2017 at 4 Hamilton Place, London W1J 7BQ.

JOIN Us Inside and Outside the AGM!

Stand Against Abuse and Harassment of Community Defenders by GCM!