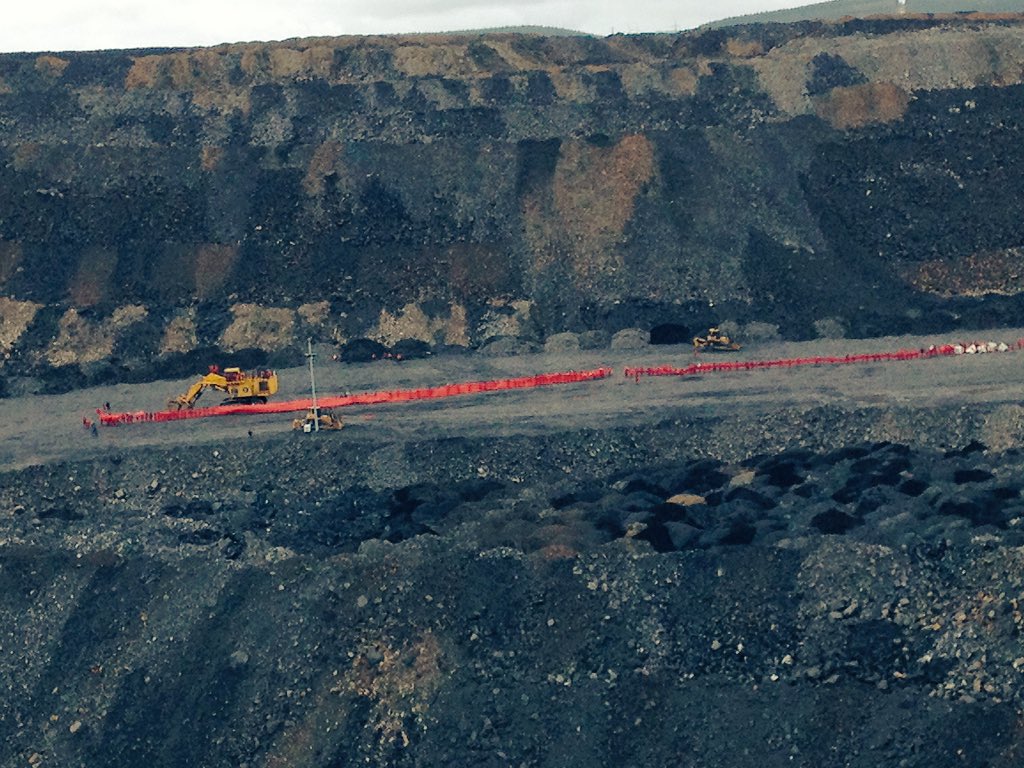 A red line was drawn by the bodies and banners of passionate protesters through the existing mine to halt open-cast coal mining. Copyright: Reclaim the Power

Tuesday, the 3rd May, has witnessed the successful blockade of the UK’s largest open cast coal mine in Ffos-y-fran, by several hundred protestors as part of a climate change movement organised by the Reclaim the Power oragnisation to help showcase the damage caused by opencast coal extraction to the environment.  This was the outcome of a week-long camping of passionate climate change action organised by the climate action network of Reclaim the Power to highlight issues surrounding the damage caused by mining companies using invasive techniques to harvest the last remaining coal reserves and the impact these procedures can have on the natural environment.  The coal company in question, Miller Argent, are looking to significantly increase their coal mining production in this area of South Wales, which would have a devastative effect on the local environment and wildlife.

The aim of Tuesday’s action was to undertake a mass civil trespass at the existing Ffos-y-fran opencast mining complex, which began at 5:30am on Tuesday morning and has continued through the day. 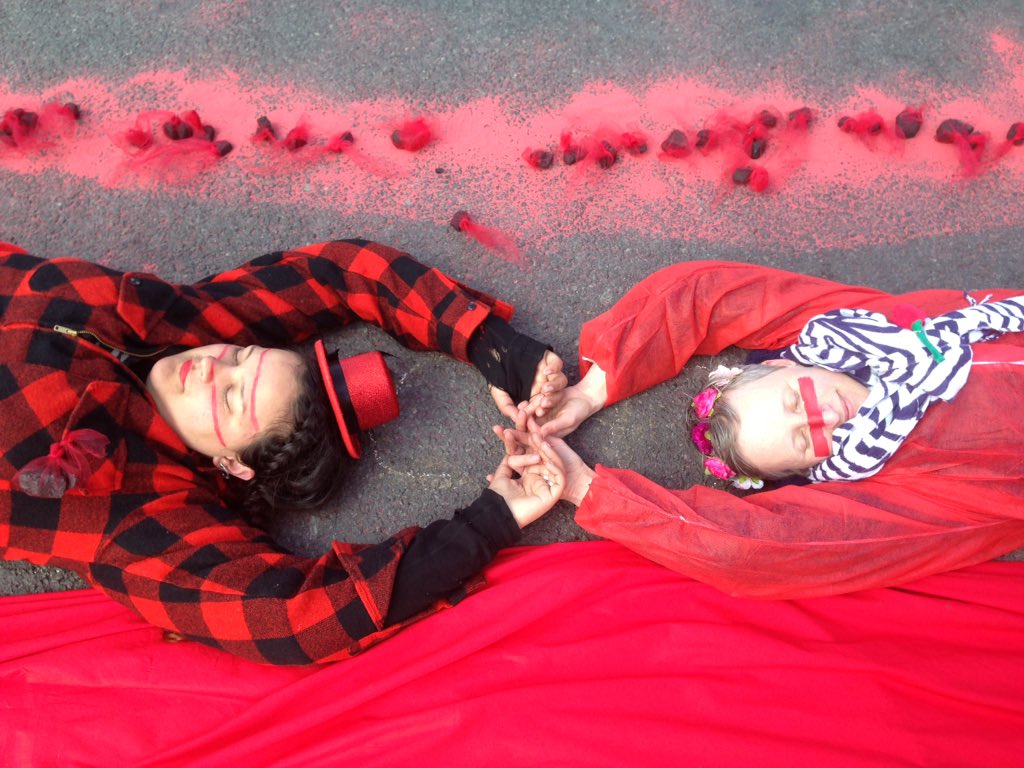 This is how protesters have drawn a red-line on coal mine at Ffyos-y-fran #EndCoal. Copyright: Reclaim the Power.

A press release by the Reclaim the Power stated that this is “the largest ever action in a UK opencast mine” with activists traveling from all across Britain and internationally to peacefully occupy the mine and show solidarity and support.  Having been fortunate enough to visit the site over the bank holiday weekend, the impact of the existing opencast mine is there for everyone to see and any expansion of this opencast method of coal extraction will have serious implications for the local area.  Two huge mountains of waste slag have already been produced as a bye-product of the extraction process. Locals are concerned that the vague promises of this material being returned to the ground once mining is complete will be ignored in the face of the financial benefits of turning the large open-pit mine into a commercial rubbish tip once mining is complete.

Tuesdays protest has been successful in halting coal mining work at Ffos-y-fran. An activist Hannah Smith, on site stated that :

“Today we’ve shut down the UK’s largest coal mine because we must keep fossil fuels in the ground to stop catastrophic climate change [….] We are taking action in solidarity with the local community who have been battling Ffos-y-fran for nearly a decade, and now face the threat of a new mine next door.” 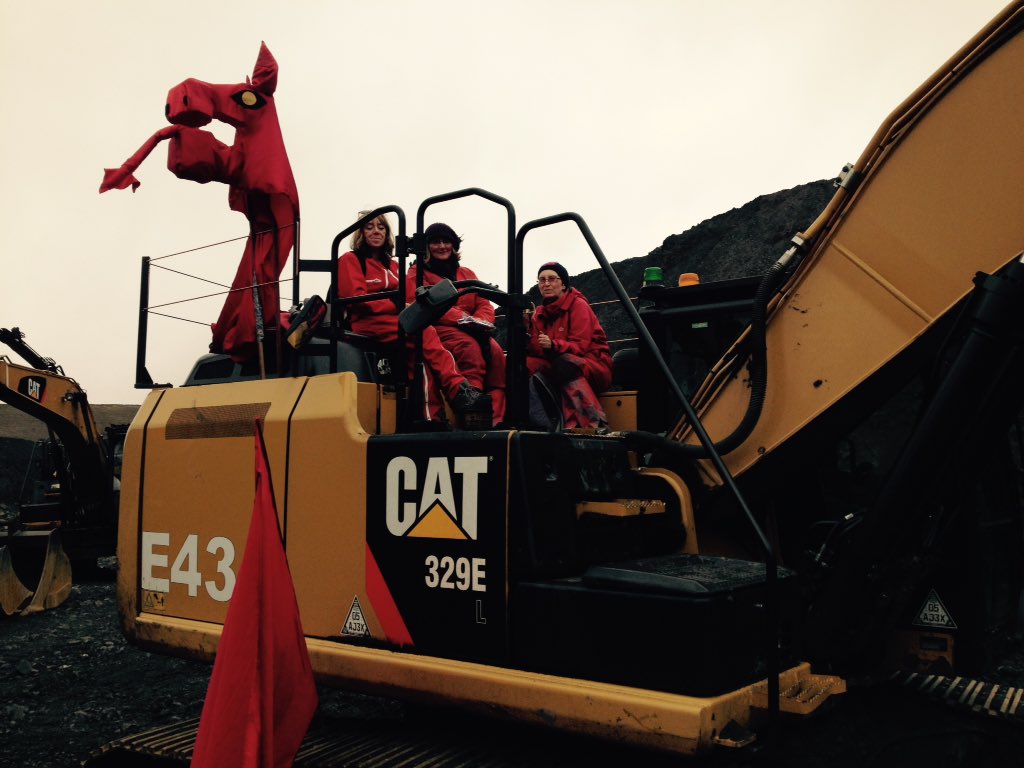 The Welsh Dragon standing firm in support of the blockade at Ffos-Y-fran and to protect environment. Copyright: Reclaim the Power.

Valleys Action Group, who have been opposing the further expansion of opencast mining at Ffos-y-fran and are now resisting a proposed mine at Nant Llesg. As highlighted in the official press release, “Caerphilly County Council rejected the application in August 2015 but the company Miller Argent is seeking to overturn this democratic decision.”

Indeed, the decision to look to expand the Ffos-y-fran opencast site seems irrational when you consider that the demand for coal itself is facing a downturn globally, especially with the growth in alternatives to coal within the clean energy sector. Equally, “the Aberthaw power station that uses 95% of the coal mined at Ffos-y-fran announced last week that it is scaling back operations” and many locals are vigorously opposed to expansion of opencast mining in the area hives the devastation that has been caused as a direct result of the mine in the surrounding area.

Tuesday’s protest also demonstrated the [assion and climax of Reclaim the Power’s ‘End Coal Now’  climate camp, situated on a hill side adjacent to the opencast mine. Activists from the UK and abroad have braved the wind and the rain to come together and to highlight the importance of fighting to preserve our natural environment and to reduce the impacts of climate change.  Events have taken place for five days to help bring together local residents with UK and international climate change activists, unions, Councillors and Assembly candidates to discuss how to guard against the environmental destruction caused as a result of open-pit mining. Solidarity was expressed by many international organisations to Tuesday’s action to end coal in Wales and the UK. Phulbari Solidarity Group has expressed unconditional solidarity with the protesters who blockaded the open-cast mine at Ffos-Y-Fran in Merthyr Tydfil. 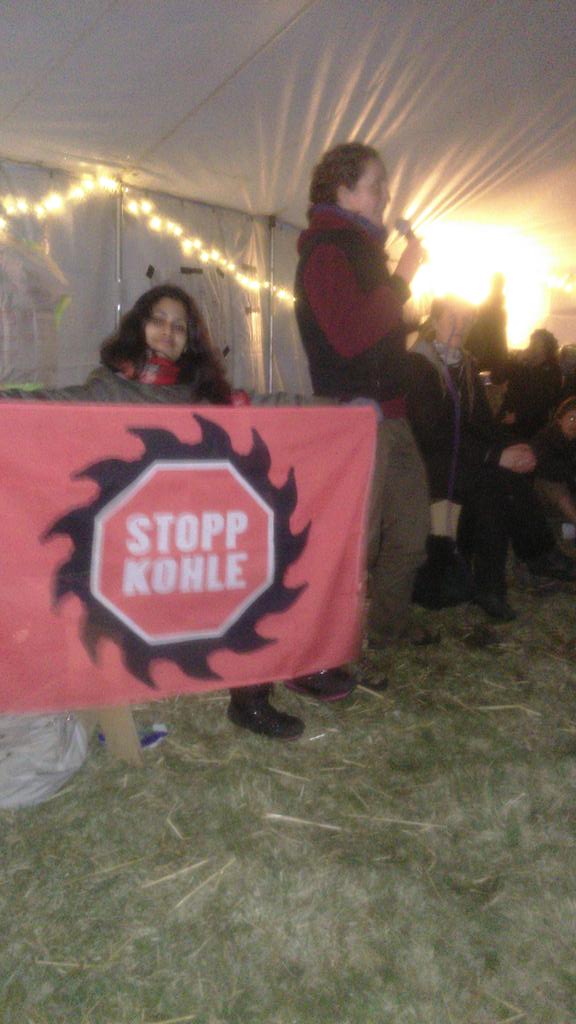 Dr. Rumana Hashem holds a red banner to end coal, presented by an activist from Germany at Ende Gelaende, as a form of expressing solidarity on Solidarity Sunday at the End Coal Now camp in Merthyr Tydfil. Copyright: Paul Dudman.

Rumana Hashem, founder of the Phulbari Solidarity Group and executive member of the National Committee to Protect Oil, Gas, Mineral Respurces, Power and Port in Bangladesh, joined the camp and spoke to a full tent of activists on Sunday evening. Rumana shared her decade-long experience in stopping an open-pit coalmine in northwest Bangladesh, highlighting the successful campaign against Global Goal Management (GCM), a London-based mining company, who wants to build an immense open-pit mine in the Phulbari region of Bangladesh. She discussed GCM’s attempts to obtain approval for Phulbari open-pit mine, which if constructed, would result in the forced displacement of 120,000 people and would cause extensive environmental degradation to prime agricultural land in Bangladesh. By illustrating her eye witness to the shooting on a demonstration of 80,000 people that left three people shot dead in spot and over 200 injured in 2006, Rumana emphasised that strong opposition and long-term constructive actions could stop any mining company and government from destroying our planet.

Rumana also discussed the campaigns against the building of new power stations in the port city of Chittagong, and in Khulna. In describing the threats posed by the to be constructed Rampal power plant close to the Sunderbans in Bangladesh, the world’s largest mangrove forest and a World Heritage site, she said that: “in Bangladesh, coal power plant does not only take away land but also kills people and rare animals.”

In conjunction with speakers discussing the impact of coal extraction on local communities in Germany, the USA and Russia, and the current concerns over the burning of fossil fuels and the impact of carbon emissions on climate change, the Sunday Solidarity panel was organised by the Coal Action Network and Reclaim the Power. The panel went to highlight the importance of environmental activism in order to bring these issues to public attention.  There were many more interesting and action-based workshops which took place or four days prior to the action at the End Coal Now camp in Fochriw.  Tuesday’s action has been an outstanding success of the organisers who were able to achieve wide media coverage and positive response in mainstream national media including BBC, the Guardian, the Daily Mail and many more who highlighted the action as a successful blockade at the UK’s largest open-cast coal mine.

Thanks to the many hundreds of activists who were able to contribute to the climate camp in Ffos-y-fran over the post few days.  The public action at the coal face itself is an example of the amount of hard work and effort that many committed environmental activists are prepared to undertake in support of such an important cause. In addition to this, there has been a large amount of hard work undertaken behind the scenes in order to ensure that the “End Coal Now” camp has been a success. From organising free catering over several days, to inviting speakers from across the world and to the practicalities of arranging this type of open event on a large scale, demonstrate the passion, ability and commitment of the climate activists that they would continue to resist and halt the proposed open-cast mine in Nant Llesg.  This has certainly been an inspirational event to many and we hope this will act as a spur to all of us to continue the fight to protect our environment.