Phulbari Solidarity Group extends unconditional solidarity with Foil Vedanta in their fight against notorious Vedanta. Foil Vedanta, a campaign group against extractive corporation, has produced invaluable reports on mining effected areas in India and Afrika, and global trade of metals by notorious multinational company, Vedanta. We will join Foil Vedanta on their annual Global Day of Action at Vedanta’s AGM again this year. Like previous years, we will join activists to bring the defiant energy of communities fighting and winning against Vedanta around the world to London on Friday, 5 August. 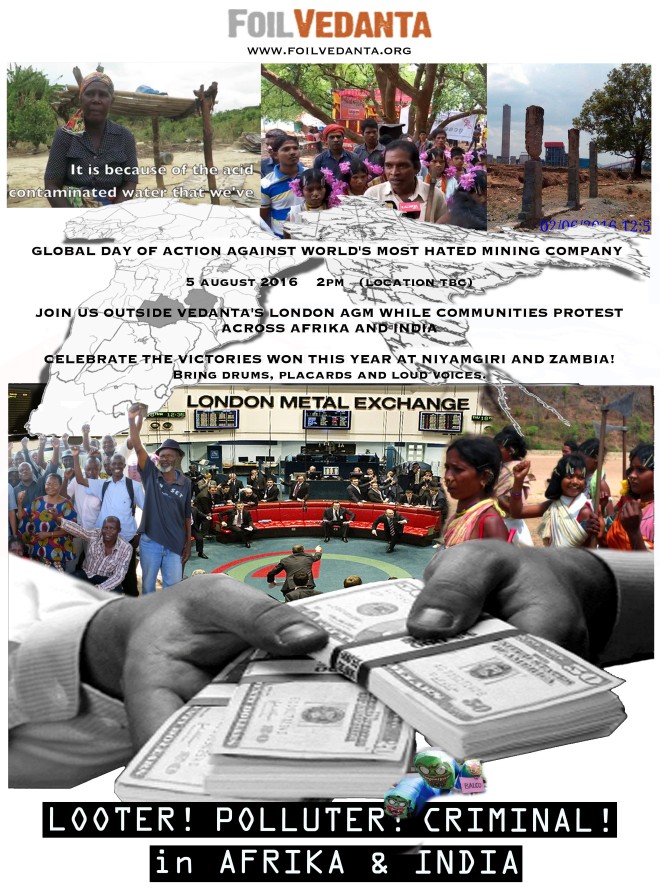 This year, pollution affected communities of Zambia won their nine years battle in their Supreme Court, and now won the right to have their case heard in Britain. In India, the Dongria Kond of Niyamgiri in Odisha are now demanding to dismantle Vedanta’s aluminium refinery in Lanjigarh, after winning their case in the Supreme Court of India.

Parallel demonstrations are already planned in Zambia and India on the 4th August and questions raised by the communities will be asked inside the AGM meeting.

We encourage our supporters and readers to join Foil Vedanta on Friday the 5th of August to tell Vedanta to stop its notorious activities overseas.
For more information please follow the link:
http://www.foilvedanta.org/actions/global-day-of-action-against-vedanta-5th-august/