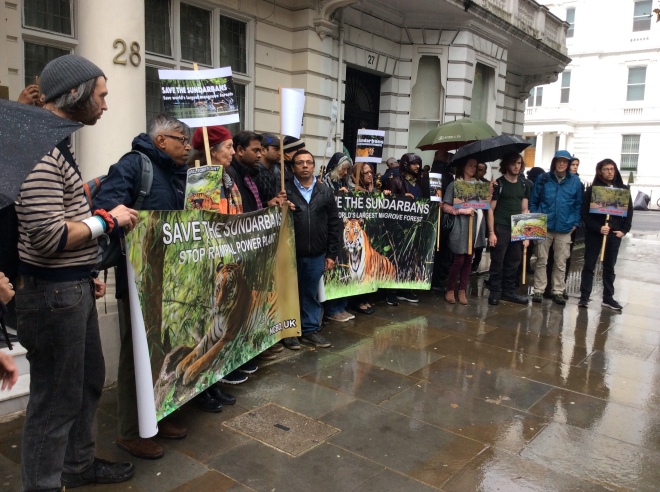 Amidst heavy policing and non-stop rain passionate climate and mangrove rights activists have blocked the main entrance of the Bangladesh High Commission in London today for three hours. A powerful and noisy solidarity action by London based transnational campaigners condemn the Bangladesh government’s decision to implement the 1,320 MW Rampal coal power plant as it would destroy the Sundarbans in Bangladesh. Protesters echo calls in their memorandum signed by members of 30 participating organisations demanding the Bangladesh government must put immediate halt to the Rampal project and take responsibility to save the Sundarbans.

A representative of five non-violent Bangladeshi protesters wanted to hand in the memorandum to the High Commissioner, Ms Saida Muna Tasneem, asking her to convey their five-point demand to the government, but she refused to make herself available to activists. Bangladeshi citizens were turned away, and denied access to the building and harassed by privately hired security guards and police which the activists called appalling. Protesters joined the UK Committee to Protect Natural Resources in Bangladesh and the Phulbari Solidarity Group with a coalition of Global Justice Rebellion and other climate organisations. Following from the refusal and rude manners of the High Commissioner and her First Officer, more climate activists joined the protest and formed a human chain blocking the entrance of the building in the afternoon. 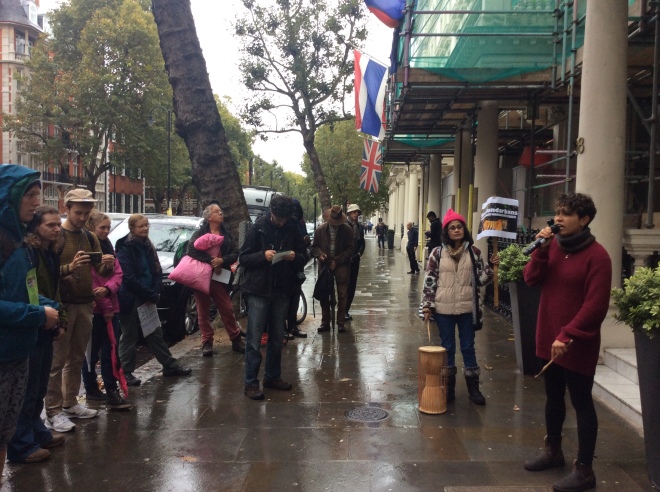 A Bangladesh-India Friendship Power Company Ltd is building the giant Rampal coal power plant project, and a joint venture between National Thermal Power Company of India and the Bangladesh Power Development Board is going ahead, enabling additional 154 industrial constructions to be built in southwest Bangladesh.  These industrial constructions are threatening the Sundarbans, located at the Indian-Bangladeshi border. The 1,320 MW Rampal coal-power plant is located 14 miles from the Sundarbans, situated at the Indian-Bangladeshi border. The Sundarbans are the world’s single largest mangrove forests, a UNESCO World Heritage Site, a natural protective barrier for Bangladeshi coast against frequent storm-surges. They also are home to one of the last populations of the Bengali Tiger. 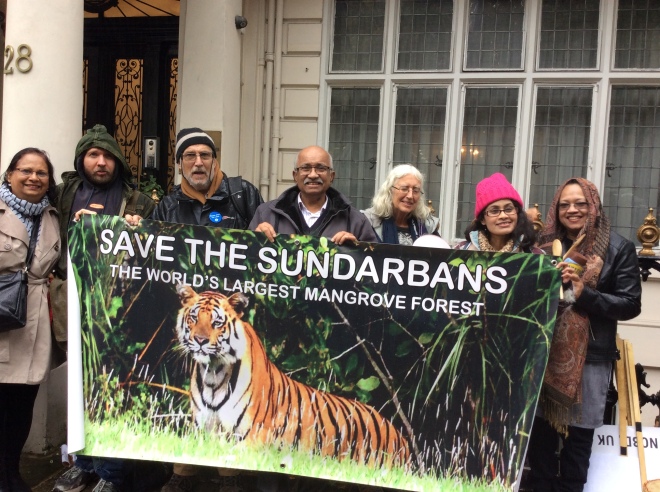 The proposed power plant is in an area already documented to be at or below sea level. UNESCO has asked the government to stop all industrial constructions until the exact impacts for the forests have been critically assessed. On Thursday 4 July at the 43rd meeting of the World Heritage Committee in Baku UNESCO “notes with great concerns the likely environmental impacts of large scale industrial projects” and asked Bangladesh government to “take all necessary mitigation measures”. Despite UNESCO’s recommendation to halt constructions, the Bangladesh government is going ahead with industrial constructions and the power plant in the vicinity. Climate activists in Bangladesh who raise voice against the Rampal project have been faced with incredible repression. 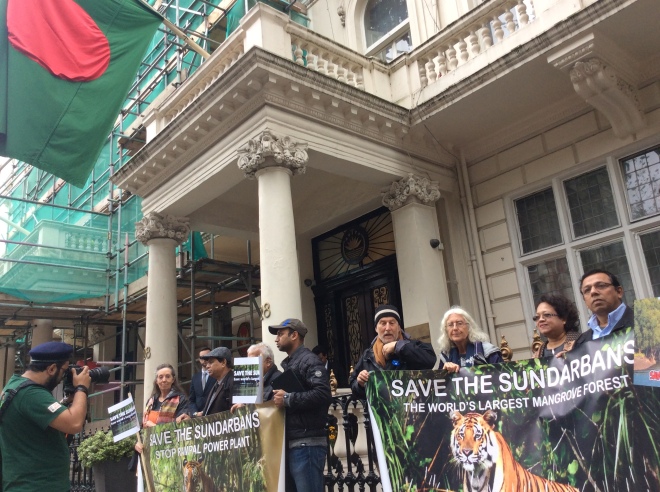 Dr Rumana Hashem, an organiser of the London Solidarity Action and the coordinator of Phulbari Solidarity Group says:

We are protesting here because the Bangladesh government does not have the right to destroy the world’s largest mangrove forests in this way. UNESCO noted the danger of Rampal coal fired project for the survival of the Sundarbans but the government has violated UNESCO’s recommendations and did not stop building coal plants. People in Bangladesh have been protesting for years but government repress them badly. We demand that the government of Bangladesh will come to sense to scrap the Rampal project immediately. We must not let destructive projects destroy our greatest mangrove forests.

There is an Alternative Power and Energy Plan for Bangladesh , recommended by the energy experts belonging to the Save the Sundarbans movement, which shows that it is possible to generate up to 91,700 MW of electricity through renewable sources. The government totally overlooked the alternative energy plan. As we protest today we have been harassed by the High Commissioner’s security guards and police, despite advance permission sought to hand in the memo to the High Commissioner  who refused to meet us.This is unacceptable.

Sundarbans are the world’s largest mangrove forests. We all have responsibilities to save them. For the Internationalist Solidarity imperatives of our Climate and Ecological Emergency International Rebellion demand, we boldly take sides with grassroots Communities of Resistance at the Global South front ranks of defending World Heritage sites like the Sundarbans. We stand firm with the communities to prevent their loss from worsening the looming catastrophe. The most decisive victories of our International Rebellion will be won on such Global South battlegrounds as the Sundarbans, to effectively save all Humanity and our entire planet Earth.

Nicki Myers, the coordinator of the Disabled Rebels Network of Extinction Rebellion, says, explaining why she and her rebels participate in this protest:

The Civil DISobedience affinity group is taking part in this action because, like everyone here, we act to protect all life. We want to use our position of privilege in being able to peacefully protest to try and save these bountiful forests and the life they support. We have also supported the UK actions against the Phulbari coal mine. Recently we were humbled by the support of our friends in the Bangladesh solidarity movement who supported our actions to secure the right for disabled people to have equal rights to peaceful protest. 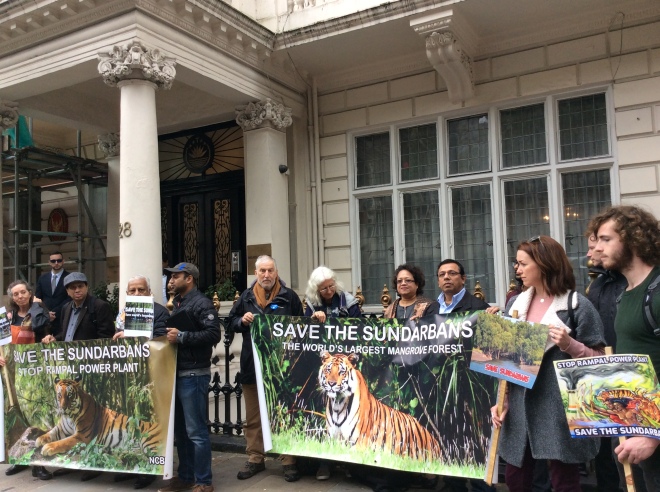 Which are the coal plants that threaten the Sundarbans?

There are three coal plants that threaten the Sundarbans. The first plant is being built by a joint venture of Bangladesh and India’s state-owned National Thermal Power Corporation at Rampal, within 14 kilometers north of the world Heritage site. There are two other plants to be built at Taltoli and Kalapara as joint Chinese-Bangladeshi ventures. The mentions of these later ones were taken out by the Chinese amendment to the final draft decision at the 43rd session on 4 July.

The pollution and dredging from these coal plants will, as a mission from the IUCN in 2016 reported, undyingly damage the world’s mangrove forests. There are also plans for two additional coal plants to be built on the Payra port, by Chinese investments, which would threaten the ecological buffer zone.

More Photos  and video footage from the protest are available on request.

More information on the Sundarbans struggle can be found at:

One thought on “PRESS RELEASE”