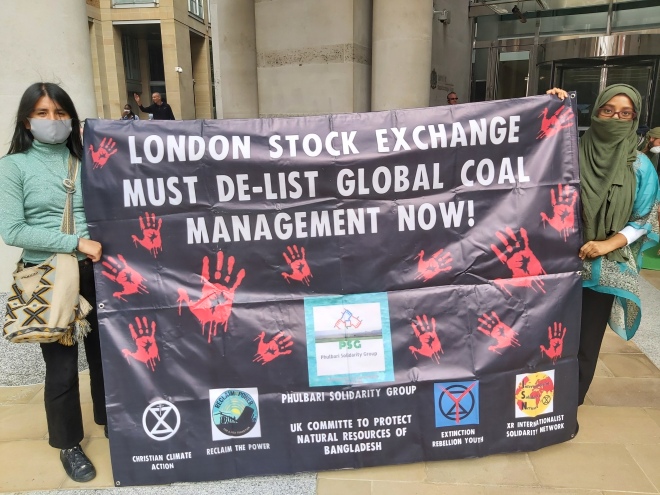 Yesterday transantional activists and climate campaigners gathered outside the London Stock Exchange in a somber vigil of remembrance and display of impassioned solidarity. Wearing green and laying white flowers, they observed the 14th anniversary of the killing of three young protesters, Al Amin (11 years old), Salekin (13 years old), and Tarikul (18 years old), who were shot dead on 26 August in 2006 while non-violently protesting the planned construction of an open cast coal mine in Phulbari, Bangladesh.

26 August ‘Phulbari Day’ is recognised in Bangladesh and is observed with vigils and commemorations by indigenous communities and anti-mining activists across the country. 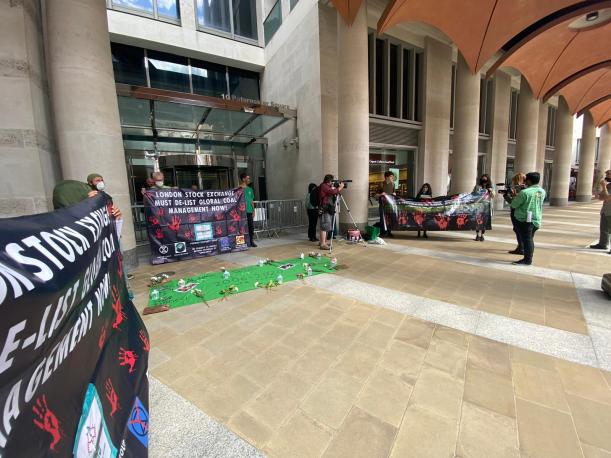 GCM Resources PLC (formerly Asia Energy) are the British-based company behind the proposed mine. They continue to trade shares in their ‘Phulbari Coal Project’ today, despite having no valid asset to operate in Phulbari and no permission to mine anywhere in the world. In their 2019 Annual Report, GCM reveled that they have signed a Memorandum of Understanding with Power China (the Chinese state owned power company) to construct a coal fire power station in Phulbari. The coalition of activists from a range of climate justice and human rights groups – led by the Phulbari Solidarity Group – London Mining Network, Labour Campaign for Human Rights, Extinction Rebellion Youth Solidarity, XR Slough, Foil Vedanta, and Reclaim the Power – demanded that GCM be de-listed from the stock exchange and no longer be allowed to trade shares. 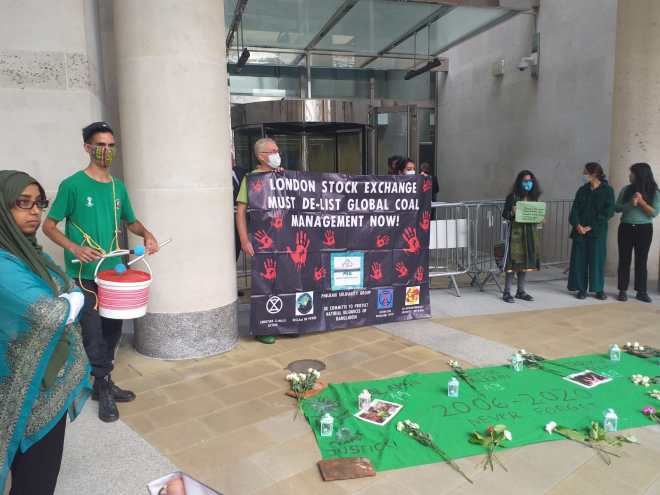 Gathering to the sound of soft drumming outside the main entrance to the Stock Exchange, the campaigners proceeded to paint the names of the dead on a green banner in an act of commemoration. White flowers were laid and candles lit in their memory. The demands made of the LSE that GCM be de-listed were read aloud and, in keeping with the vigil also held today in Phulbari and across Bangladesh, a 3 minute silence was observed for Al Amin, Mohammad Salekin and Tarikul Islam. 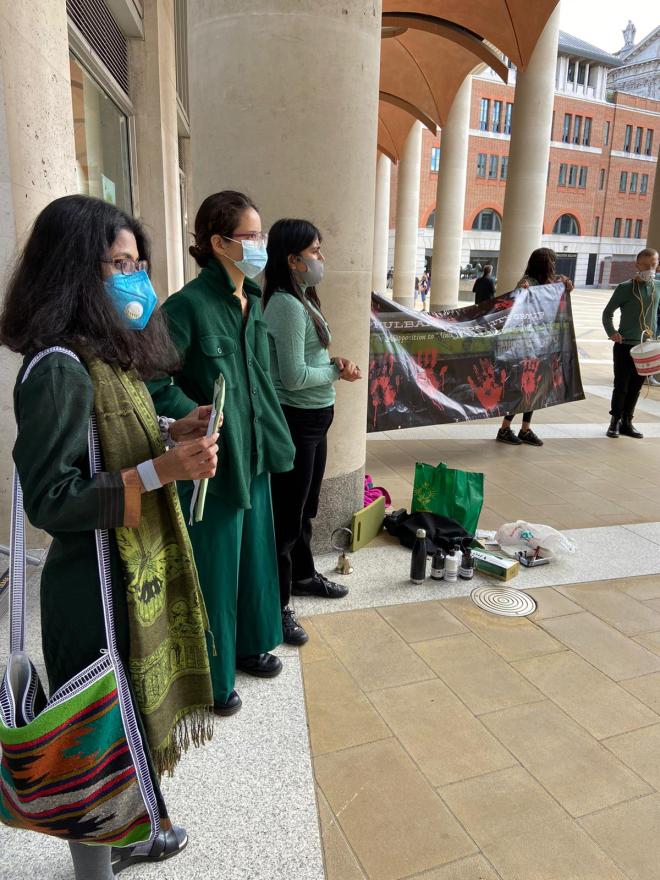 The vigil was later joined by an elderly British-Bangladeshi group who were demonstrating outside of the London Stock Exchange after midday, under banner of the UK branch of the National Committee to Protect Oil, Gas, Mineral Resources, Power and Port in Bangladesh . Other groups attending the vigil include Extinction Rebellion Taunton, Global Justice Rebellion, and Extinction Rebellion Internationalist Solidarity Network.  The intergenrationl green vigil ended with soft drumming. 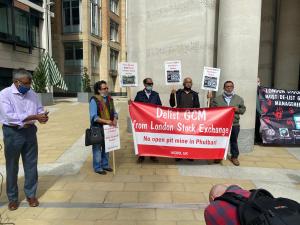 Representatives of the Phulbari Solidarity Coalition then attempted to deliver a formal letter (see Green Memorandum to London Stock Exchange) to the Stock Exchange, requesting that David Schwimmer, Chief Executive of the London Stock Exchange Group begin the process of de-listing GCM and launch an investigation into their activities. The letter presented in a green envelop was not accepted by the security present. A copy was left behind at the entrance to the building and another to be posted to the LSE Group. 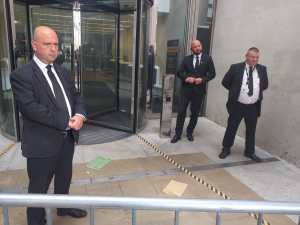 In their letter, the  Phulbari Solidarity Coalition alleges that GCM have engaged in fraudulent activity in continuing to sell shares in London based on a project that has no legal permission to go ahead in Bangladesh. Further, the letter suggests that the plan to build an open cast coal mine in the only flood protected region of northwest Bangladesh constitutes ecocide. The LSE has not previously acted to penalise any London listed mining company for alleged involvement in the killing of protesters. The coalition says this is bringing the LSE into disrepute.

“ London Stock Exchange has shown no respect to us. By rejecting our memo, and not letting the post room accept our letter the LSE has rather proved that they support unethical business of British companies who can incite violence overseas.

But I am inspired by the creatively powerful protest today, led by the coalition in which XR Youth Solidarity, XR Slough and London Mining Network played vital roles. This shows that Phulbari resistance will not die. Here on the 14th Phulbari Day, we are growing .  Our struggles will continue as a connected resistance against coal mining. We will come back to London Stock Exchange until the day this company has been delisted.”

“I fully support the protest outside the London Stock Exchange today and stand in solidarity with the Bangladeshi people. The United Kingdom cannot be complicit in human rights abuses abroad and we have a responsibility to better regulate our financial industries in a just transition to a more green and sustainable future.” 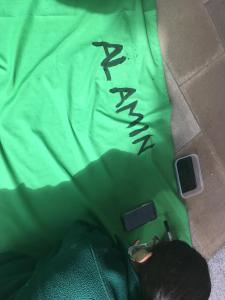 “As XR Youth Solidarity, we stand with the Phulbari Solidarity Group in marking the 14th anniversary of the Phulbari Day shooting. The human beings who were murdered, Al Amin (11 yo), Mohammad Salekin (13 yo), and Tarikul Islam (18 yo), were all youth: their deaths represent the most violent manifestation a system that actively silences the youth’s ability to cause a radical shift from corporate neoliberal extractivist enterprise. As a united global youth community, we mourn for the futures that were taken away from them by the violence of the extractivist system we live in. For us at XR Youth Solidarity, Phulbari Day represents the undeniable link between people and planet: our global fossil-fuel addicted economy is killing people, directly and indirectly, and driving us towards the ecological and climate collapse, while leaving communities like Phulbari to mourn for the youth that stood against this fate. We stand united against GCM and emphatically condemn their continued listing in the London Stock Exchange.”

“The British-based coal company, GCM Resources, is showing complete disregard for the climate crisis that threatens our planet. Moreover it is trampling on the rights of the Bangladeshi people. I fully support the protest outside the London Stock Exchange today and stand in solidarity with the Bangladeshi people. The United Kingdom must not be complicit in human rights abuses anywhere in the world and we have a responsibility to properly regulate our industries in a transition to a more green and sustainable future, and that respects the lives and the rights of people everywhere.”

“Since LMN was launched in 2007, we have supported the struggle against the Phulbari project. It is utter madness for GCM to keep pressing on with a new opencast coal project which would displace tens of thousands of people dependent on rural occupations, with no guarantee that they could find alternative work, and at a time when we know we have to stop burning coal anyway. UK authorities should not allow London share markets to be used to finance this kind of destructive project. GCM should be delisted.” 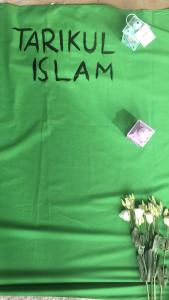 “This is unbelievable that a fraud company like GCM which has no credibility even as a business house, rather it has blood in its hands, lies in their leaps, falsehood in their papers, poison in their activities- still enjoying support from British establishment to continue with these. This company has been cheating people in share business to make money in the name of Phulbari where they were behind killing people, on which they have no valid license, where they tried to implement a disastrous project, from where they were driven out in 2006  by a mass uprising  and never allowed to enter.

Since 2006, in all these years they have been trying to recreate violence in the area, tried to mobilize criminals against community leaders, made false cases against them, but could not enter into the area. People’s resistance remains strong. These frauds should be driven out by British institutions including LSE. We are looking forward to seeing the trial of these criminals in Dhaka and London.”

Yesterday’s green action took place in solidarity with those in Bangladesh and mirrors a silent rally of the Phulbari communities in Nimtola corner. It aims to put pressure on the LSE to de-list GCM. If this were to happen, GCM would no longer be able to trade on the LSE’s Alternative Investment Market (AIM), significantly affecting their funding and representing clear action being taken to hold the company to account. Campaigners point to potential fraud, harassment of local communities and the fact that GCM holds no valid license to mine in Bangladesh as reasons to de-list the company.

Despite lacking any contract with the national government, GCM have continued to move forward aggressively with their plans, which would displace up to 230,000 people and destroy up to 94% of the region’s agricultural land. Their 2019 Annual Report states that GCM have signed a Memorandum of Understanding with Power China to develop a 4000MW power plant in Phulbari.  In May 2020, GCM announced extensions to strategic partnership talks for the Phulbari coal project in Bangladesh, they extended a joint venture agreement with PowerChina and the MoU with NFC by 12 months to January 2021, and recruited a local agency called the DG Infratech Pte Ltd, a Bangladesh company to lobby with the government and to get their dodgy deal through.

“Even in the absence of an agreement, GCM or Asia Energy is trading shares in London by providing information that coal would be extracted from Phulbari, which is false. The government has taken this into notice. The government is proceeding to take legal action against them.”

A short film of the vigil is avaiable here: https://www.youtube.com/watch?v=avVbmZd4QQY

To organise statements or interviews with any of the host organisations,  and for video clips from the green vigil please contact: