This is a reporting from the frontline of climate activism in northwest Bangladesh, and an eyewitness to coal-led bloodshed, and women’s resistance against mining in a post-colonial location in South Asia.  The discussion tells us about the Truth – who should we save, on the one hand; and advocates for the need to change, and the need to prevent climate breakdown and environmental injustice, and killings by coal-mining and multinational corporations listed on London Stock Exchange. 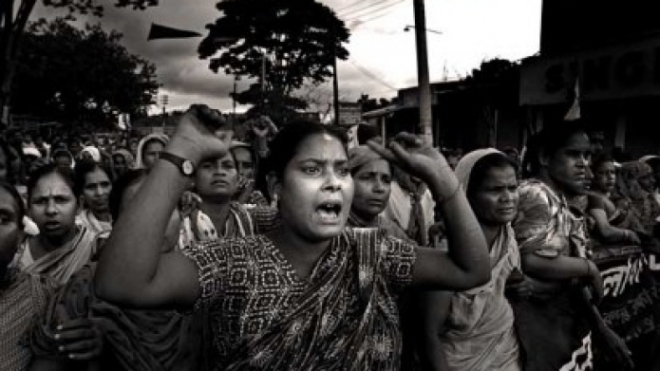 The story is important on this International Women’s Day because it reminds us why and how women fight coal mining, at the same time how rarely women get recognised by the nation. Women in northwest Bangladesh know that coal doesn’t only damage environment but also kills humans. On 26 August in 2006 three young people were shot dead and over 200 injured in Phulabri when paramilitary forced opened fire on a demonstration of more than 80,000 people who marched against a coal-mine proposed to be built by a British mining company, Asia Energy, thereafter the toxic Global Coal Management (GCM) Resources Plc.

The Global Coal Management plans to extract 572millions tons coal from Phulbari  and wants to build a massive open cast coal mine by displacing upto 220, 000 people and polluting 14, 600 hectares of fertile land (1 hectare is equal to 2.471 acres or 10,000 square metres) from Bangladesh’s only flood protected area.  For the people in the region, this project would mean losing their livelihood and identities because the mining would disperse the communities. It would impact upto 50,000 indigenous people from the area.

The three killed in August 2006 were teenagers aged from 11 years to 18 years. I was present in the spot and saw innocent children dying and people getting badly injured, while running away from the town as gunshots, tear gas and arrests continued in the afternoon on a sunny Friday. When most people had run away, a group of women peasants turned around and started to chase paramilitary personnel and Rapid Action Battle (RAB) who were torturing men, women and children of all ages. The fighter women were swearing at the male soldiers, Police and RAB, and running with their home made sweep, cooking sticks and bamboo sticks. The fight went on for nearly two hours and the BDR gradually moved away from the main road as women told them that they had no right to enter the civilian’s space.

Women’s outburst after shooting in Phulbari in the evening on 26 August 2006. Photo: Anonymous @Phulbari Solidarity Group.

Police enforced section 144 and announced emergency leave so women were then forced to go home. The night came with darkness and silences everywhere, and police played a role of industrial security guards for the British mining company. They raided houses in the manless town from 1am to 3am in the morning of 27 August. Everyone except the women and their children left the town. The mothers, sisters, aunts and grandmas had stayed in the town to protect their children. The fight did not end until we won.

People in Phulbari, Barapukruia, and all six neighbouring chapters took strike actions for five days. It was women who took on the leading road for strikes. Four thousands women in Khoiyrbari took over the highway and roads on 29 August and cooked meal in their handmade oven right on the road and stayed there with their babies, as young as 4 months old.  Nurunnahar, a sex worker, who chased hundreds of RAB and Police alone in the morning of 27 August, was the leader of all of us in the town of Phulbari.  Nurunnahar taught everyone how to be brave and told us never to give up.

Nobody gave in. The men and children joined the women’s march, and continued strike actions till 31 August when government signed the six-point demand, ensuring that no mine will be built in Phulbari without public consent. People’s verdict won. 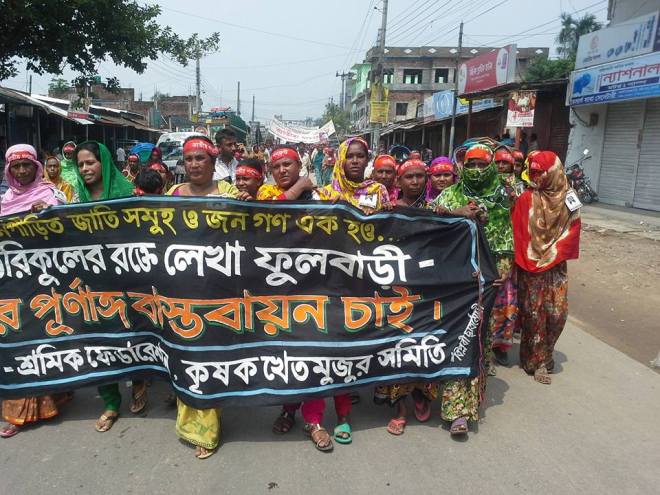 Families of the victims and women peasants protesters march towards Shahid Minar, the memorial of the three killed, in Phulbari to pay tribute. 26 August 2015. Photo: Anonymous @Phulbari Solidarity Group.

Government has cancelled the deal with the company. The controversial GCM is a London-based AIM-listed extractive company, who do not have any valid asset anywhere. They do not hold a valid contract with Bangladesh since September 2006. People have put a halt to the mine for more than 13 years. But GCM are selling shares on Phulbari coal project’s name. They are to hold their AGM again this Tuesday on 10th March. This will be resisted. Women and men in Phulbari town will be demonstrating against the AGM of GCM on Monday 9th March. In London, we will convey the message from Phulbari communities at the AGM of GCM, by holding a picket outside of the venue.

The Phulbari women know that coal mining is not about progression or development, it is about profit. Women continue to resist GCM and any plans for extractions in Barapukuria, and the neighbourhood of Phulbari. Nontheless, women’s contributions get rarely recognised by the male leadership in Bangladesh.

We should not forget the invaluable contributions of women in Phulbari resistance. The narrative of anti-coal mine struggle in the South Asian country illustrates the links between climate injustices, the power of anti-coal struggles, and women’s organising in the global South, in this case, Bangladesh. We must not undermine the resistance movement and women’s power to halt the massive open cast coal mine. 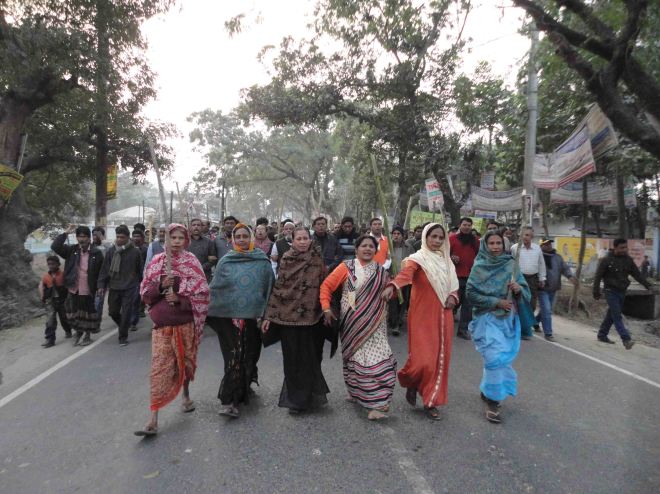 We will be joining the picket against GCM’s AGM in London as our duty to stand with the women, men and children in Phulbari. Everyone is invited to join the demo and picket at 9am on Tuesday 10th March at Glaziers Hall, 9 Montague Close, London, SE1 9DD. Join us!