Resistance to open pit mine, forced-displacement and environmental disaster is strengthening everyday in Phulbari.  Yesterday, our colleagues from Phulbari reported an exciting development.  Shahriar Sunny, a forefront activist of National Committee in Phulbari, states that villagers opposing the proposed Phulbari Coal Project imprisoned two personnel of Research and Development Centre (RDC) believing that they are agents and spies of Asia Energy.

In a written message to Phulbari_Action Group, a virtual forum to share information about resistance to the proposed Phulbari Coal Project in Bangladesh, Sunny states,

‘Some intruders from RDC entered in the village of Poragram (Birampur Upazila) on  January 10 2013 . They entered on a disguise of voter ID corrector. Almost always they only enlist woman on their category. Villagers captured 2 of them. After capturing the villagers imprisoned them for 5 hours. We rescued them from enraged villagers, and handed over
them to police intact’.

When contacted, the co-ordinator of Phulbari Solidarity Group , Rumana Hashem, says, ‘ this incident symbolises the power of the resistance and the passion of people to halt the long-disputed Phulbari Coal Project’ .

She said, ‘GCM and their lobbyists are yet to recognise the power of community resistance to the proposed open-pit mine in Phulbari. But they will soon’, she added.

Asia Energy is known to be the Bangladesh subsidiary of Global Coal Resources PLC, who proposed to build a destructive and immense open pit mine in the North-west of Bangladesh. The project would forcibly evict an estimated 130, 000 people immediately and would pollute water resources and agricultural land by which an estimated 220, 000 people would be gradually removed from the region. The Home Ministry in Bangladesh issued a circular on 14 Oct 2012 instructing the RDC and local officials in Phulbari to cooperate with GCM in carrying out surveys in the area.   Leaders and activists of National Committee in Bangladesh also complained that the Home Ministry has issued two letters one of which has been kept confidential.

Shahriar Sunny from Phulbari said, ‘Senior deputy secretary Md. Faruk Uj Zaman issued the two letters as confidential. On a letter they ordered police super of Dinajrur district and Upazila Nirbahi Officer (UNO) of Phulbari, Parbotipur, Birampur and Nababganj to help and facilitate all activities of RDC ‘.  The situation in Phulbari is volatile since.

Earlier on this month, villagers and indigenous communities led by National Committee of Bangladesh and Peshajibi Sangathan (Association of the Phulbari Entrepreneurs) gave an ultimatum to remove Asia Energy’s local offices by March 30, 2013. Leaders of the above organisations asked the London-based and AIM-listed mining company, GCM Resources Plc to withdraw their two offices from Phulbari by 30th of March. 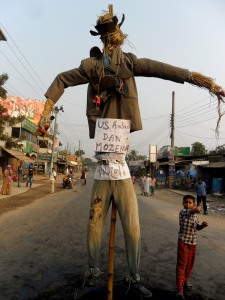