Yesterday we have witnessed an extra-ordinary Rebellion Day in London where climate change dissenters closed down iconic bridges in the city. Despite arrests and police barricades, five bridges in central London were closed down by concerned, disobedient and non-violent civilians, who gathered in the city under the banner of Extinction Rebellion, a platform committed to “Fight For Life”. 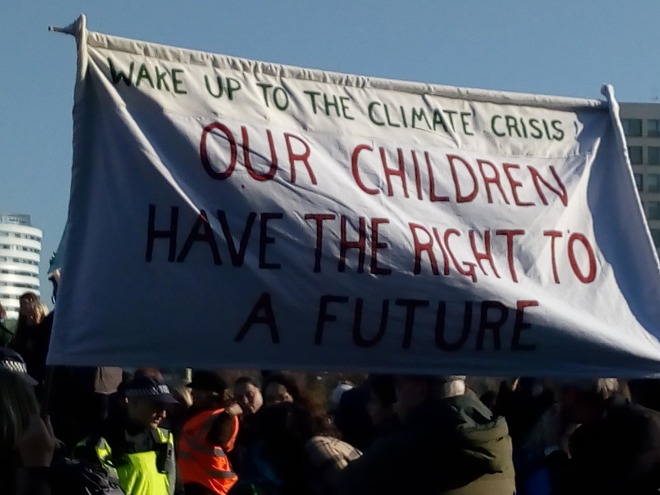 From the morning 10am through late afternoon 5pm on the Rebellion Day more than 6,000 people have occupied five bridges in central London “to raise the alarm on the climate and ecological crisis – and to put pressure on the Government to come clean on the fact that there is a climate emergency”. A press release by the Extinction Rebellion notes “This is the first time in living memory that a protest group has intentionally and deliberately blocked the five iconic bridges of central London”. The blocked bridges include Southwark, Blackfriars, Waterloo, Westminster and Lambeth. Police have put signal blockers in place to prevent live streaming. There have been 22 confirmed arrests of protestors. People have willingly put themselves at risk of arrest and imprisonment to ensure that this cause is brought to the public’s attention. 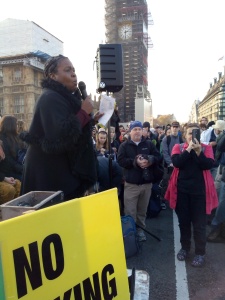 We were there in Westminster Bridge with full support from the Bangladesh National Committee and Phulbari Solidarity Group to the rebels. At the end of the blockade an Extinction Assembly was held featuring six voices from six nations from the global South affected by climate breakdown.

The Phulbari Solidarity Group declared solidarity with the Extinction Rebellion on the Rebellion Day. Rumana Hashem, the founder of the Phulbari Solidarity, who attended the Assembly at the Westminster Bridge, said that: the ongoing civil disobedience to decarbonise our lifestyle and to protect our planet from criminal extractive companies and governments was long- overdue. Rumana gave her witness to the climate crime committed by a London-based mining company in Bangladesh.

She stated by addressing a passionate crowd that:

I’m bearing witness to the killings of three people and the destruction of green land, rivers and homes of thousands of peaceful people in Bangladesh, perpetrated by a British mining company for 12 years. An AIM-listed London-based multinational company, Global Coal Resources Management plans to build a massive open-cast coal mine in northwest Bangladesh, in Phulbari. Original research by independent researchers shows that if the mine is built at least 130, 000 people would be immediately displaced, polluting water sources of as many as 220,000 people. It will destroy over 14,000 hecters of land in the country’s most fertile agricultural region, where most people have land-based livelihoods. It would contribute to catastrophic climate change by supplying coal burning power stations. It would threaten the Sundarbans – one of the world’s largest remaining mangrove forests and a UNESCO World Heritage site.

The company, previously known as Asia Energy, has been hotly resisted by locals for its fatal business policy. On 26 August in 2006, over 80,000 farmers marched in Phulbari where three people were shot dead and over 200 injured when paramilitary troops fired on a massive demonstration. I was present there. I have witnessed the bloodshed; I saw people’s stomach coming out right on the street. So we’ve blocked roads, bridges, and railway in the region. All entries to the region were closed down for a week. Following on the shooting, Bangladesh government has cancelled all contracts with Global Coal Management. We’ve put a halt to the project.

This shows that civil disobedience works. It is required in historically specific context. When government fails, we need to take control in our hands. We need to act to save our lives and our planet. We would not occupy bridges and roads for ever though. We ought to take control of our streets at times to make the governments take steps to prevent crimes.

In Bangladesh, we said, “No fracking, invest to save the planet”. But that is not enough. The London-based company is still aggressively moving on to get a new deal with the government. They continue to breach law. They have been harassing indigenous people. 26 frontline activists have been faced with multiple arbitrary cases filed by the company in 2016. We asked the UK government and political leaders to use their influence to stop the Global Coal Management, and to act immediately to prevent climate crimes. But the UK government failed to act.

We’ve submitted three reports to the Joint Committee for Human Rights Enquiry into Human Rights and Business in 2009.  We’ve placed a joint OECD complaint to the UK National Contact Point in 2013, and I have given many witnesses. But no action was taken against the company. The Parliament failed to print the witness statement that I gave for their annual report in 2009. They said that they couldn’t print the witness due to financial hardship. The parliament wanted to save printing cost. Instead of publishing my report, the Joint Committee has published a response from the Global Coal Management in their annual report in 2009!

Rumana also said that Bangladesh is at the frontline of climate change. We have reached a juncture when preventing climate change has become urgent. We want a fair commitment from the UK to stop coal based power plants and corporate grabbing in the name of development in Bangladesh and the UK. We call on the government for ensuring renewable energy and social justice without delay.

She concluded by saying:

This Rebellion Day is, to me, a beginning of a much needed social movement that not only challenges the criminal inaction of the ecocidal governments but also a way to connect with each other over struggles in the global South and the global North to make our planet habitable for all. I stand in solidarity with the Extinction Rebellion on this Rebellion Day.

The Rebellion Day has ended by a treeplanting ceremony in the Parliament Square, with more than 3K Extinction Rebellion protestors present. The rebels planted three trees in the centre – plum, apple and evergreen – while singing a sufi song called “Always in Love”. 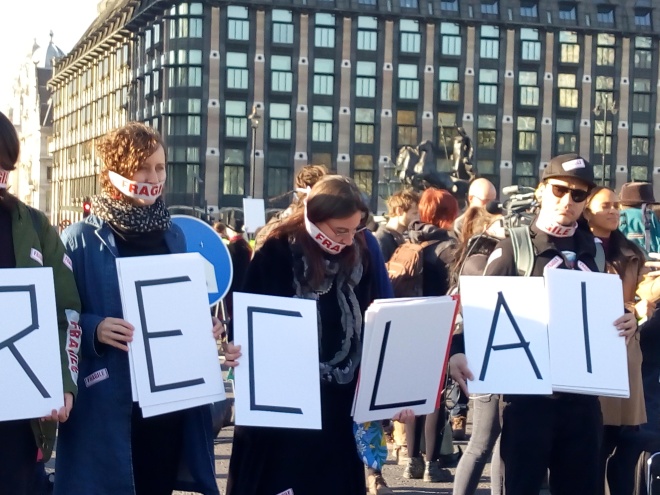 Please visit the Rebellion Day Facebook page for further information and news about the blockades: https://www.facebook.com/events/1758991460816073/

Also pictures by Peter Marshall are available for editorial use from Alamy. Westminster Bridge pictures at https://www.alamy.com/news/newsresults.aspx… 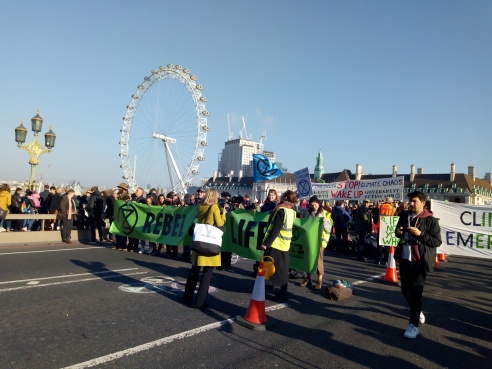 Credits for most photos used in this report belongs to Rumana Hashem, except for those indicated by Peter Marshall. The photos are free to use but please acknowledge the photocredit, thanks.