Memorial of Al Amin, Mohammad Salekin, and Tarikul Islam in Phulbari. It reads: WE DO NOT WANT COAL MINE! AMIN, SAEKIN, TARIKUL, SLEEP IN PEACE. WE ARE AWAKE AND WIlL REMAIN VIGILANT.

Protest outside of London Stock Exchange

This 26th August marks the 14th anniversary of the Phulbari Day shooting. On 26 August in 2006 three young people Al Amin (11 yo), Mohammad Salekin (13 yo), and Tarikul Islam (18 yo) were shot dead, and more than two hundreds injured in a non-violent demonstration of 80,000 people who marched against a London-listed mining company, GCM Resources Plc., in Phulbari. GCM want to build a massive open cast coal mine by forcibly displacing 130,000 people in Phulbari, the only flood protected location in northwest Bangladesh. The day has been marked as Phulbari Day since the murders of Al Amin, Salekin and Tarikul.

Powerful resistance by women, children, indigenous men, farmers and teachers against the mining company has in the aftermath of the shooting put a decade long halt to the coal project. The Bangladesh government has declined all contracts with GCM. But the company continues its dodgy deals. GCM announced extensions to strategic partnership talks for the Phulbari coal project in Bangladesh, they extended a joint venture agreement with PowerChina and the MoU with NFC by 12 months to January 2021, and recruited a local agency called the DG Infratech Pte Ltd, a Bangladesh company to lobby with the government and to get their dodgy deal through. Despite having no valid contract with Bangladesh, they are aggressively moving ahead with their plans.

If the mine is built, 130,000 people and farmers in Phulbari would be displaced, 14,600 hectares of highly cultivable land would be destroyed (1 hectare=2.58 acres), clean water resources be threatened and one of the world’s largest mangrove forests, the Sunderbans, would be damaged. In return GCM would enjoy 9 years tax holiday, would extract coal for 36n years, and offers only 6 percent revenue to the government keeping 94 percent profit from 572 million tons of high quality coal in Phulbari.

London Stock Exchange (LSE) is hosting this company. The LSE has the power to suspend or expel a company from AIM for breach of the AIM rules . Despite our repeated calls to investigate GCM’s rights to business, the LSE is reluctant to do so. We had been there with black vigil and red vigils in the past. This year we are going with a green vigil. We demand the London Stock Exchange must de-list GCM. 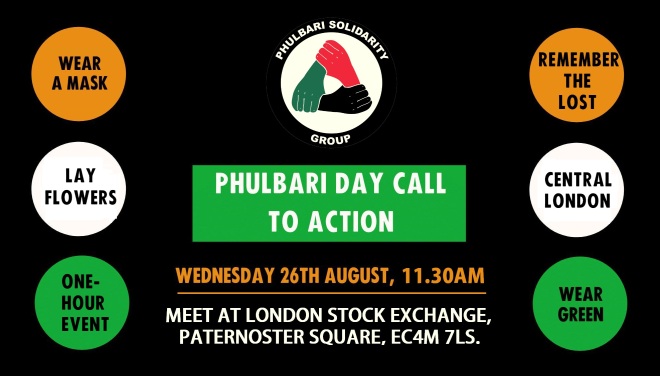 In this Black August, Phulbari Solidarity Coalition stands with the people in Phulbari.  The coalition’s Green Vigil is organised by the Phulbari Solidarity Group, London Mining Network, XR Youth Solidarity,  Reclaim the Power, Labour Party for Human Rights, and XR Slough. We will be protesting silently with canvassing in the City of London. In the spirit of Black Lives Matter, we will pay tribute to the three black youths Al Amin, Mohammad Salekin and Tarikul Islam by Green Canvassing and art works by the youths.

Communities in Phulbari are holding silent rallies in Nimtola corner to pay tribute to Amin, Salekin and Tarikul’s graveyard on 26th August. Civil societies in Bangladesh joined by the Phulbari Solidarity Group are hosting online protests and webinars on witnesses to Phulbari Day, demanding the government take legal action against GCM. Coinciding with the community commemoration,  we will hold a GREEN VIGIL at the London Stock Exchange (nearest tube station: St Paul’s). We will honour the lost lives by rallying and canvassing silently at the City of London. We demand London Stock Exchange MUST De-list GCM Resources Plc.

Wear Green as a symbol of Solidarity with Phulbari!

Bring along your hand written placards!

We will maintain social distance but commemorate and protest together!

Today on 7 September, 26 frontline community leaders from Phulbari, Parbotipur, Khoyrbari and Nowabgonj stood trial as the London-listed company GCM’s CEO, Gary Lye, filed multiple arbitrary cases in Dinajpur Magistrate Court. Gary Lye and GCM’s Bangladesh subsidiary, Asia Energy, continue to abuse the communities in Phulbari and Dinajpur for they had taken stance against GCM’s plans against open cast mine in Phulbari in 2006.  The 26 anti-mining community leaders were convicted of aggravated trespassing and criminal damage-related offences as they surrounded the vehicle of Gary Lye and the entrance doors of a building that hosted the corrupt CEO of GCM when they returned to recreate violence in the township in 2014. The communities stand firm to fight these arbitrary cases.  Phulbari Solidarity Group stand in solidarity with the communities. As a gatekeeper organisaiton to Phulbari, we have been receiving messages of solidarity to the community leaders from across the world this week.

A beautiful and powerful message of solidarity has just arrived from Rhineland Klima Camp. The message came via email to Phulbari Solidairty Group in support of both the brave activists in Phulbari and the campaign to save the Sundarbans. The message states that the fight against coal miners and corrupt multinational corporations has to continue. Activists at the Klimacamp in the Rhineland in Germany wanted to send the following message and photograph on the tenth anniversary of the Phulbari killings. It was delayed to reach us due to unforeseen.  The message from Klima Camp resistance states:

One thousand people at the launch of Rhineland Klima Camp in resistance from Germany, around Europe and beyond stood in Solidarity with Phulbari protesters on the tenth anniversary of Phulbari outburst on 26 August 2016. Photo credit: Klima Camp Solidarity.

“Dear people fighting against the Rampal coal-power plant and the coal industry in Bangladesh,

As activists at the Klimacamp in Germany we want to express our solidarity with people fighting against the destructive Rampal coal-power plant and the coal industry in Bangladesh. We know that we are battling against the same issues – the coal industry, state power, climate change, human displacements and ecosystem destruction. However we acknowledge that the situation for people protesting in Bangladesh is much more severe than for those of us who live in Germany and Western Europe.

When we protest in our countries we may be arrested and treated harshly by the police, but we know that we will not be intentionally killed. We are aware of our nations’ involvement in the destruction of your country – that the company that wishes to mine at Phulbari is listed on the London Stock Exchange and that our countries cause climate change but Bangladesh is at the forefront of climate change impacts.

At the Klimacamp we are taking actions against the coal industry and other polluters in Germany. We see this as a small piece of the bigger picture in the battles against coal and for a liveable climate. We want to send our support and solidarity to you, especially as you mark the tenth anniversary of the Phulbari demonstration and the murder of villagers.

There were a thousand people at lunch on our resistance camp today, from Germany, around Europe and beyond. They were told your story, and invited to join the photo to send you solidarity. So many people wanted to take part that we couldn’t fit them all in the shot. Your work is an inspiration to us.

In solidarity,
campaigners at the Rhineland Klimacamp 2016.”