Today on 7 September, 26 frontline community leaders from Phulbari, Parbotipur, Khoyrbari and Nowabgonj stood trial as the London-listed company GCM’s CEO, Gary Lye, filed multiple arbitrary cases in Dinajpur Magistrate Court. Gary Lye and GCM’s Bangladesh subsidiary, Asia Energy, continue to abuse the communities in Phulbari and Dinajpur for they had taken stance against GCM’s plans against open cast mine in Phulbari in 2006.  The 26 anti-mining community leaders were convicted of aggravated trespassing and criminal damage-related offences as they surrounded the vehicle of Gary Lye and the entrance doors of a building that hosted the corrupt CEO of GCM when they returned to recreate violence in the township in 2014. The communities stand firm to fight these arbitrary cases.  Phulbari Solidarity Group stand in solidarity with the communities. As a gatekeeper organisaiton to Phulbari, we have been receiving messages of solidarity to the community leaders from across the world this week.

A beautiful and powerful message of solidarity has just arrived from Rhineland Klima Camp. The message came via email to Phulbari Solidairty Group in support of both the brave activists in Phulbari and the campaign to save the Sundarbans. The message states that the fight against coal miners and corrupt multinational corporations has to continue. Activists at the Klimacamp in the Rhineland in Germany wanted to send the following message and photograph on the tenth anniversary of the Phulbari killings. It was delayed to reach us due to unforeseen.  The message from Klima Camp resistance states:

One thousand people at the launch of Rhineland Klima Camp in resistance from Germany, around Europe and beyond stood in Solidarity with Phulbari protesters on the tenth anniversary of Phulbari outburst on 26 August 2016. Photo credit: Klima Camp Solidarity.

“Dear people fighting against the Rampal coal-power plant and the coal industry in Bangladesh,

As activists at the Klimacamp in Germany we want to express our solidarity with people fighting against the destructive Rampal coal-power plant and the coal industry in Bangladesh. We know that we are battling against the same issues – the coal industry, state power, climate change, human displacements and ecosystem destruction. However we acknowledge that the situation for people protesting in Bangladesh is much more severe than for those of us who live in Germany and Western Europe.

When we protest in our countries we may be arrested and treated harshly by the police, but we know that we will not be intentionally killed. We are aware of our nations’ involvement in the destruction of your country – that the company that wishes to mine at Phulbari is listed on the London Stock Exchange and that our countries cause climate change but Bangladesh is at the forefront of climate change impacts.

At the Klimacamp we are taking actions against the coal industry and other polluters in Germany. We see this as a small piece of the bigger picture in the battles against coal and for a liveable climate. We want to send our support and solidarity to you, especially as you mark the tenth anniversary of the Phulbari demonstration and the murder of villagers.

There were a thousand people at lunch on our resistance camp today, from Germany, around Europe and beyond. They were told your story, and invited to join the photo to send you solidarity. So many people wanted to take part that we couldn’t fit them all in the shot. Your work is an inspiration to us.

In solidarity,
campaigners at the Rhineland Klimacamp 2016.”

It was Phulbari Day on Thursday. It was the day to commemorate mass protests that prevented a UK-based mining company, Global Coal Management PLC, from building a large-scale open-pit coal mine in Phulbari in north-west Bangladesh. Nine years ago, on 26th August in 2006, three brave protesters were shot dead in the mass protest that took place in opposition to plans by GCM, a London based AIM-listed corporation, who wanted to forcefully displace 130,000 people from their homes by grabbing 14,600 hectares of highly cultivable land in Bangladesh. The powerful demonstration in 2006 ended in tragedy when paramilitary force opened fire on a rally of 80,000, people, leaving three people killed and two hundred injured.

The 26th August has been marked as a day for commemorating the protesters in Phulbari since then. On the ninth anniversary on 26 August 2015, the day was remembered with respect, as ever, and people’s resistance was celebrated by diverse groups and rights-activists across Bangladesh and in London. In Bangladesh, campaigners of National Committee at Phulbari, Dhaka, Narayanganj, and several other regions were joined by many other human rights and art groups who paid homage to Phulbari protesters.

In Phulbari, nearly ten thousands of people have paid tribute to Al-Amin, Salekin and Tariqul – the three innocent civilians killed by GCM-provoked shooting in 2006. People have started to gather in the town as early as seven o’clock in the morning to pay homage to those who died that day and to celebrate the people-powered resistance that has prevented the massive mine being built for almost a decade. Schools, colleges, shops and business enterprises were shut for all day in tribute to those brave protesters who forced the British coal miners to leave Bangladesh. The procession of homage, initiated by the Phulbari branch of National Committee, was joined by farmers, agricultural workers, rickshaw-drivers, van-store employees, school teachers, doctors, medical students, professionals, art-activists, business entrepreneurs, and of course local leaders of political parties. Parents of the dead, Al-Amin and Salekin, and the injured men including Bablu Roy and Pradip attended the rally in the town centre.

Families of the victims and women protesters march towards Shahid Minar in Phulbari to pay tribute. 26 August 2015. Photo: Anonymous

Locals in Phulbari called upon the government to remove fabricated cases against leaders of the Phulbari movement. They demanded for an immediate implementation of the Phulbari deal and called upon a permanent expulsion of Asia Energy, the Bangladesh subsidiary of GCM , from Bangladesh. Activists have also asked government to compensate the affected people in Borapukuria mine. Leaders of National Committee announced fresh programme to be held later this year against government’s destructive policy of coal-powered plant in other parts of the country. The rally called upon the government to implement the 7-point demands of the National Committee and to prevent Rampal coal-fired power project from happening which would destroy the countries only mangrove forest and a UNESCO heritage, the Sundarbans. They demanded that Orion coal-fired plant must be resisted and suspended immediately.

The same demands were projected in the tribute to Phulbari resistance in other parts of the country, and in East London. In London, members of the UK branch of the Bangladesh National Committee to Protect Oil, Gas, Mineral Resources, Power and Ports, and activists of Phulbari Solidarity Group were joined by transnational campaigners and environmentalists from Global Justice Now, UNISON, and the Socialist Party of England and Wales. Messages of support and solidarity were delivered by representatives from Tamil Solidarity, National Trade Union and London Mining Network, also.

In the meeting at the Montefiore Centre in East London transnational activists have taken a pledge to resist all sorts of conspiracy for coal-fired power in Bangladesh. The member secretary of the committee in the UK, Dr Akhter Sobhan Khan, has updated the forum about development in Bangladesh. That Bangladeshi government has eventually recognised that due to the high population density and the fact that much of the local economy is based on agriculture and other land-based livelihoods, open cast mining is not a viable project for Bangladesh. The forum welcomed this news of a recent statement by Bangladesh’s state minister for power, energy and mineral resources, Nasrul Hamid that the government does not want to use open pit mining in the region. 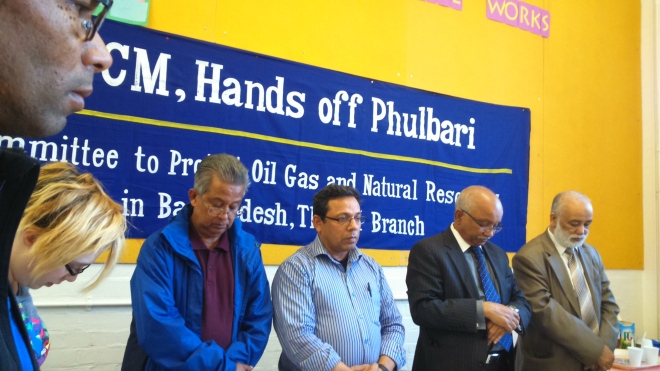 The meeting, presided by Dr Mukhlesur Rahman, has started by following one minute silence in the honour of Al-Amin, Salekin and Tariqul. Participants have discussed recent developments in the campaign against the mine. The Chair of the meeting has updated the forum about the invalid contract between the government and the company.

The founder of Phulbari Solidarity Group and an eye witness to the shooting in Phulbari, Dr Rumana Hashem, gave her eye witness to the tragic event and the deadly shootings. She described how local women and men had made the company to leave the area. She noted that locals are still vocal against the mine as they recognised that the mine, if built, would cause mass evictions and destroy thousands of hecters of farmland in an area that forms part of the country’s breadbasket. Rumana’s statement was followed by speeches by comrades such as Dr Jinnah, comrade Moktar, Mostofa Kamal, Ishak Kajol and several others.

Christine Hague, who joined the meeting to represent Global Justice UK, then delivered a message of solidarity from Global Justice Now, in which she said that Global Justice Now has been supporting the campaign against the mine since 2008. They have been putting pressure on investors, which saw Barclays and RBS withdraw their support, exposing the UK government’s support for GCM and joining protests at the company’s AGM each year. They have also supported US-based International Accountability Project to submit a complaint to the UK National Contact Point for the OECD Guidelines on Multinational Enterprises, in the hope of using this mechanism to hold GCM to account.

Although the complaint was accepted for investigation, the UK NCP failed shamefully to consider the impacts of the project should it go ahead, focusing only on the company’s actions in the planning stage to date. GCM was still found to have failed to “foster confidence and trust” in the local community though it was otherwise let off the hook with a recommendation that it update its plans and carry out a human rights impact assessment. This is, as colleagues in Bangladesh noted, likely to lead further unrest. In fact, within four days of the publication of the final statement on the complaint, a visit by GCM’s CEO, Gary Lye, to the area triggered three days of protests and strikes, including an occupation of GCM’s offices in Phulbari.

But the failure of high level international mechanisms like this made Thursday’s gatherings in recognition of the mass resistance to the project of Phulbari ever more important. A representative from UNISON, Hugo Piere, told the forum that UNISON would be proud to be part of any campaign or action that the community takes against GCM in future. A full-solidarity has been expressed by both UNISON and the Socialist Party of England and Wales.

Likewise, Isai Pryia from National Trade Union and Tamili Solidarity has sent message of solidarity. The message which Helen Pattison of Socialist Party delivered to the gathering states: ‘Although, unfortunately, Tamil Solidarity couldn’t make the meeting today we stand in solidarity with you. We remember the dead and fight for the living. We hope that we will be able to work more closely together in the future’. 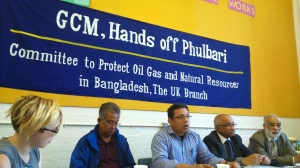 The meeting has ended with a pledge that any attempt to implement coal-fired plant in Bangladesh will be resisted and solar energy should be promoted. People in both Bangladesh and London have acknowledged that despite the tragedy, people in Phulbari have made an example by preventing the devastating project from happening for almost a decade. It is solid people power. And that’s definitely worth celebrating.

But sadly, the news of celebration and commemoration in Phulbari remains under-covered in mainstream media. Professor Anu Muhammad, the member secretary of National Committee and a leading economist in Bangladesh stated: ‘while the significance of Phulbari resistance has been recognised by national and international environmentalists, with the exception of a few newspapers mainstream media has ignored the news of Phulbari Day.’

The fight for people’s right, nature and environment must move forward. Activists in London have now decided to hold a symbolic protest this September when the Bangladesh’s Energy Advisor Toufiq Elahi visits London.